It's hard to believe that it's already the end of January. We've had a super mild winter (as most have unless you live in the northwest). No snow at all so far this winter. We don't get a whole lot of snow but every year we've been here we've had at least one storm that shuts down the city and closes the schools. It's been nice so I don't feel so cooped up in the house with baby.

Logan is doing great. He is eating like crazy this week so maybe he is going through a growth spurt. Yesterday he wouldn't stop crying unless I gave him more food; I kept thinking he couldn't possibly need more but he proved me wrong! At his last weight check he was the 46th percentile (10lbs 4oz) so he's definitely not a big guy or anything, but we can tell he's putting on a bit of chub now.

I've now run a handful of times and each time feels better and better. Yesterday I made it out to Umstead with Tassie and felt really good. My endurance is horrible which is no surprise, but I'm just glad I felt like I might be getting back towards actually running as opposed to jogging.

I've also swam twice (wow I'm slow) and ridden the trainer once (not only am I slow, but my bum is out of practice sitting on the seat. ow.) So yeah, slowly but surely I'm getting back into the workout scene. Now if only I didn't have to feed the kid all the time I might be able to get out more than 1hr at a time!

Here is Logan after stuffing himself silly: 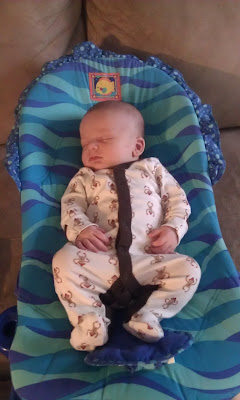 And he's started smiling...something I've been dying for. I read that no matter the nationality, pretty much all babies start smiling around 6 weeks old. We got our first ones just a few days shy of his 6 week birthday, and I got a huge one this past Tuesday. 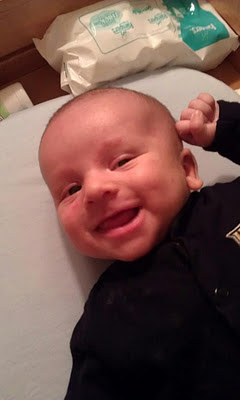 Last Saturday we all got out to wine tasting party where Logan was passed around among a bunch of the mother's. He had a great time getting all loved on and I think a couple of them were fighting over who got to hold him. Anytime you all want to come over and hold him so I can get out, feel free ;)
Posted by BriGaal at 2:25 PM

LOL. Lisa loves holding kids. She hates she always has to apologize for her husband every time he sees a new born!! :) I roll my eyes!! :)

A smile to melt your heart!!! What a cutie!

Sounds like you are doing great! And isn't it awesome once they start smiling? I'm impressed you got a picture already. Zach was a really happy baby but it took me forever to catch the smile in a picture.