Patriots Half and Sprint Weekend

Marty, Tassie and I left straight from Marty’s high school cross country practice on Friday evening. We were going to save a little money and stay at my sister’s house on Friday night in Chesapeake, VA. She lives about an hour away from the race site in Williamsburg, and 4 am was an early wake up call for us on Saturday morning. No trouble getting to the Jamestown Settlement where the races started and finished – temps were cool! 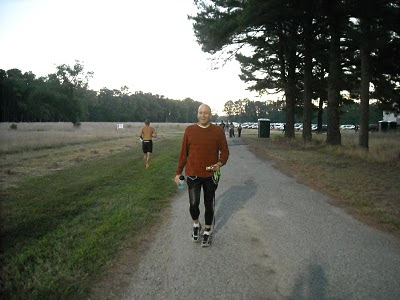 Marty started in the 4th wave but had such an awesome swim that he was in the top 10 getting out of the water. There was a good current parallel to shore, but when turning back to the finish most people got swept real wide and added a ton of time to their swim times. It was also quite shallow and a lot of racers chose to slowly walk out of the water instead of continuing to swim or dolphin dive. Marty-I-Am-An-Awesome-Open-Water-Swimmer took a great line and dolphin dove his way to a very fast split considering the conditions. Erin, one of his athletes and our good friend, was also racing and killed all the women in the swim. Marty was lucky to outsplit her! 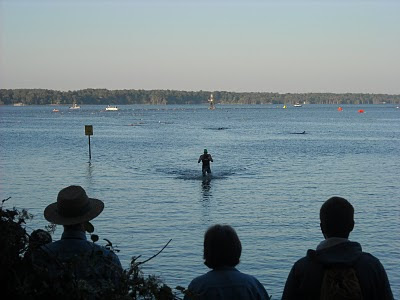 Dan, Michelle and I set up camp while everyone was out on the bike. It really is tiring spectating, which I know sounds ridiculous but I’ve spectated enough of these long events and can honestly say how draining it can be. We cheered for all the racers coming off the bike – Marty came off 4th but I think at this point he was really leading the race since he started 9min behind the first wave. The run was two loops so we got to see everyone a lot. Erin ended up 2nd overall and broke 5 hours in her first half – that girl is dripping with talent and works hard – in her first year of triathlon she is already a force to be reckoned with! Marty finished up 6th overall and had a really solid race. 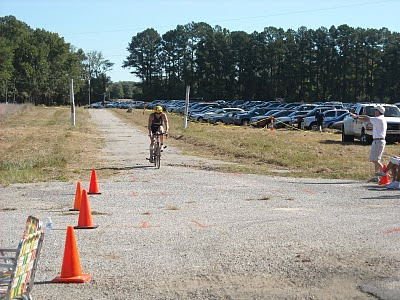 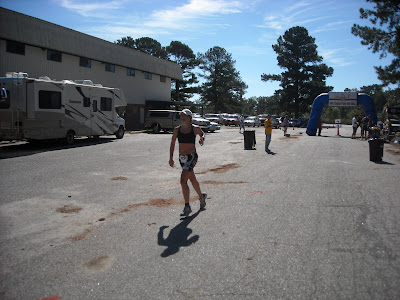 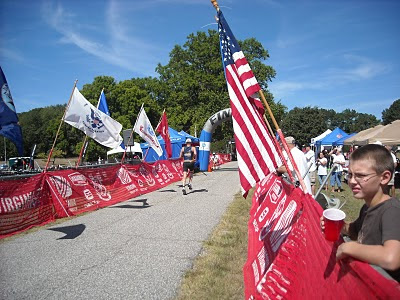 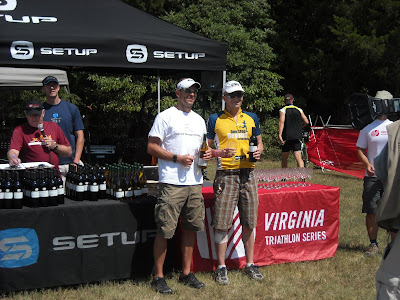 I was exhausted when we finally got to our hotel that afternoon. Since the sprint was starting at 7am we decided to stay in Williamsburg that night so we didn’t have to drive back and forth to my sister’s and get up sooooo early again. This was a good idea since a group of us had a fun time at dinner that night. We ended up at Hooter’s…don’t ask.

We got up the next morning to rain and 60 degree weather. We were running just a bit behind schedule so Marty stayed at the car to get my bike ready so I could head to packet pickup and get all my stuff. It’s really annoying to just be standing in lines when it’s raining, not to mention setting all your stuff up when you know everything is just going to get soaked. I was starting to get a little anxious because even after all the lines, Marty still wasn’t there with my bike and we hadn’t parked that far away. He finally showed up with his disc for my back wheel. We had been having trouble with my disc – specifically, my cassette would just fall right off of it. Marty thought that actually on the bike it would be fine but it wasn’t working. Apparently, while putting his disc on my bike, my cassette must have fallen off the bad disc into the deep grass of the parking area. We didn’t realize this until we got home and were unloading the car. If anyone finds an almost brand new cassette at the Jamestown Settlement, please contact me ;)

I felt rushed and poor Marty got the brunt of my anxiety when I was trying to get my wetsuit on and our bottle of Pam was clogged. Sorry, honey. The first wave was men 34 & under and I was the second wave of women 34 & under. I mistakenly tried to dolphin dive at the start and it was too deep so I kind of mucked that up, but managed to get on some fast feet for a little while. The swim for my wave was uneventful, unlike for the some of the later waves who dealt with a moving buoy, and the last waves who didn’t even have to go around the first turn buoy because after moving it was eventually just taken from the water. I tried to be like Marty and took a good line into the finish and got some good dolphin diving at a more appropriate water level on the way in. I think I was 4th or 5th out of the water. The run to transition was long and I had some trouble getting my wetsuit off (remember the no Pam incident?) but I managed to get on the bike in 2nd place. 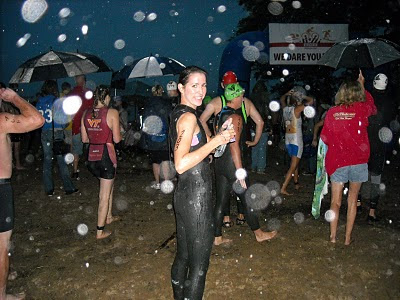 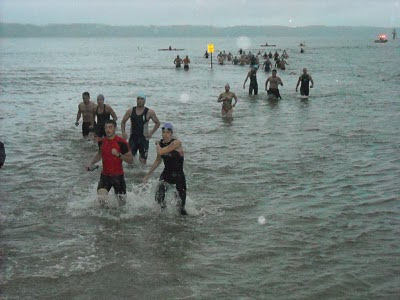 I moved into 1st place quickly and then just concentrated on passing as many guys as possible. The roads were wet so I was careful but felt like I pushed pretty hard out there.

T2 was all right, a little slower than normal because it turns out putting soaking wet socks on is harder than dry socks. Yes, I wear socks even in a sprint. I have sensitive feet. I felt good heading off on the run and again, just tried to pass as many guys as possible. 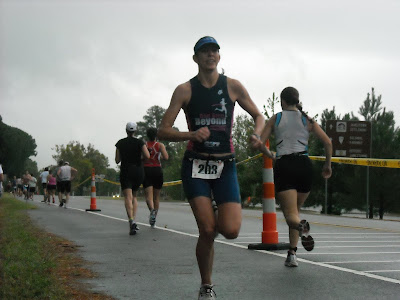 All in all, it was a good race. A nice final tune-up for USAT Nationals in two weeks. Here's a link to the results.

Erin and her mom came out to cheer for us in the rain when they could’ve been sleeping off their half in the nice hotel. Tom and Marty were also great cheerleaders for us – great job to Dan on his 2nd place finish. This race gives wine and wine glasses for awards – nice!! 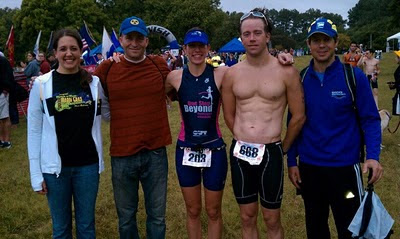 Great weekend for the Gaal's!! Congrats! I agree, racing in the rain is no fun. It's not bad if it starts WHILE you are racing but having everything all wet in the boring - BOOOOO! But you crushed it anyway!! Ready and rearing to go for Nationals!! :)

Yay, what a fun weekend is right! Congrats to you and Marty!! how fun - well, despite the wetness!! :)

What a weekend! The Gaal's are cleaning up! Way to go to both of you. I don't spectate enough, but I hear it is VERY hard & tiring so for you to race the next day and do it so well was awesome! Congrats! Almost Nationals time!!