Marty and I raced in the Smithfield sprint triathlon this past weekend. I’m almost embarrassed to write a race report about it after reading everyone’s Oceanside and New Orleans adventures! This was just a tiny, short sprint in Virginia. Still fun and I had a pretty good day out there, so here goes.

This sprint starts at the humane time of 10:00am, so you don’t have to get up god-awful early. And unlike last year, the day was going to shape up to be pretty nice. Chilly in the morning (and very windy!) but clear blue skies and SUN! There weren’t any pre-race antics to speak of so let’s move to the swim.

The Virginia Triathlon Series does not have an Open division this year so my time only got me seeded as 30th. It seemed that most girls were pretty honest with the swim times they entered and a lot of guys weren’t. Which is why Marty, who ended up having the fastest swim by almost 30 seconds, didn’t go until 13th. It only occurred to me this year that the pool we swam in was a 25 meter pool, not yards! Last year I remember being kind of mad about my swim time, but now I know why. I caught the guy who started in front of me after 100 meters but other than that it was uneventful. I went 10 seconds faster this year, but that could’ve been because I wore my PointZero :)

I was in and out of transition super quick, listening to my own personal cheering section the entire time. I was 44 seconds faster this year because no extra gear was needed this time around. It was cold at the start of the bike but I warmed up fine. It was also very windy, and I was regretting my decision to use my disc as I was getting blown all over the place. The good thing about starting further back was getting to pass a bunch of people on the bike. This made the ride go very fast and the huge tailwind coming home was fun! Towards the end of the bike I saw someone who had obviously flatted and was very carefully riding their bike in. And then I saw who it was --- Marty! What a bummer. Overall I went almost 2 minutes faster this year – I’m stoked about that!!

Off the bike and I hear my cheering section again giving me splits, telling me I’m in first or close to it but that doesn’t mean I don’t need to run hard (thanks, dad, because I was considering just loafing!). I pushed the run and felt okay until the last ½ mile when I acquired the worst side stitch ever. I hardly ever get these and it was truly debilitating! I grimaced the rest of the way in and couldn’t push it too hard at the end. My run was about 30 seconds slower than last year :(

Overall, I ended up in first place and was about 2:30 faster than 2008, so I’ll take it! I beat Marty, but that was totally on a technicality and I think he would’ve done quite well if his wheel hadn’t rotted off. Below are some great action shots my sister took.

That night we watched a lot of basketball, stuffed ourselves with lasagna and cake and slept like logs. The next day we had brunch in historic Williamsburg before heading home from another successful weekend.

Great job to everyone else who raced this weekend – it was a lot of fun to track people and see the awesome results! 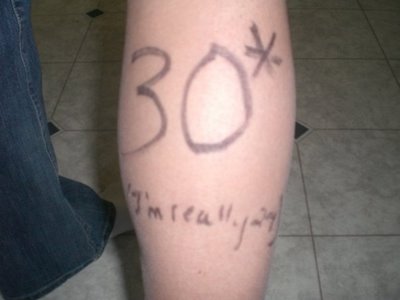 Part of our cheering section 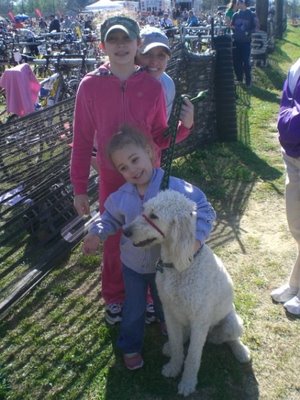 Heading off for the bike

Marty and his flat 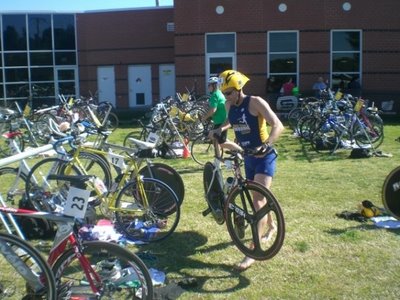 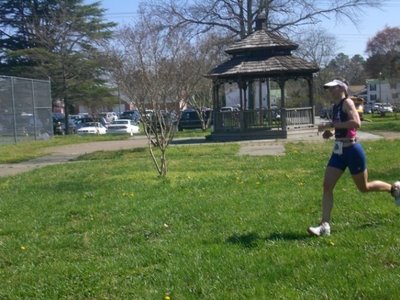 Me and my sisters

Marty and I hanging out with Thomas Jefferson on Sunday

Great race and congrats on improving your time from last year!!! I love your new kits. You guys look super cool.

aww shucks, a win is a win, bri! besides, sprinters rock!
-ds

Great race and 2.5 min improvement! Congrats on the win! Tassie looks like a happy and proud tri doggie :)

You are a stud. YOU just do soooo well at these short and OLY races...way to win by ALOT and beat Marty (oh, sorry, Marty!)....love the pics. Keep on training hard! :)