We have a local duathlon that I have never done until this past Saturday.  They have a long course (5mile run - 31mile bike - 5mile run: hello crazy! that is way long for this time of year!) and a short course (2.5mile run - 17.5mile bike - 2.5mile run: for us wimpier types).  I didn't do this last year, but I did spectate with a 3 month old: 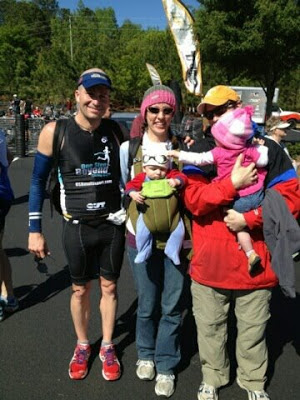 The week leading up to this was not the greatest. I got sick/was super tired, probably both from camp. I was a little worn out from the training and would typically blame it all on that, except the amount of yellow phlegm that was present every morning and my husky (sexy?) voice pointed to possibly a bug.﻿  I did sleep a TON, though.

Marty was all, wah wah you are going to beat me I'm so slow and I was all, you are a faster runner right now then you are giving yourself credit for and you know I'm not that strong on the bike.  He was sandbagging and (spoiler alert) was strutting his stuff after beating me by a minute.

It was a beautiful day, albeit chilly in the morning. But with blue, sunny skies and a 9am start it was nice early season racing weather. Not going to lie, I was happy there wasn't a swim involved :)

There were over 300 people at this duathlon, and although I haven't done a whole lot of duathlons before, this seems like a pretty big turnout. Apparently, there were people who drove down from New York and Pennsylvania for it.

It was a bit crowded at the start, and even though I absolutely hate going off too fast I lost all confidence and upon seeing so many girls ahead of me I went way faster at the beginning then I meant to.  I definitely didn't feel great this entire race, I was honestly pretty flat and tired but I felt sort of strong if that makes any sense.  It's also the first race of the season when you use T1 as a place to rest, ha.  The run was not flat and had a couple of hilly places, and the bike was not easy/fast, but I knew all this going in.  A headwind on the return portion of the bike just added more *fun* to the whole event.  Marty put a lot of time on me on the bike after I outran him on the first run, and I figured I wouldn't be able to catch him on the 2nd run. Quote of the Day goes to the guy I was passing when Marty was running the other way: "If he loved you, he would wait for you."

﻿﻿﻿
﻿﻿﻿Logan was having fun with Rita, and right after our race Marty went to get him and he had a great time waving at everyone and trying to bounce in the Bounce House (which looks like he is doing baby squats).  He also will stop whatever he is doing if he hears some music and start dancing (again, baby squats). He feels the beat and has to MOVE.  ﻿