Things have settled down. Logan is almost all better; he still has a bit of a lingering cough but it's not as often and he's eating like a total pig again which is great (even though that means every time we turn around we're feeding him). At 4 months we can try and feed him some 'real' food (rice cereal) so we went ahead and bought some to try maybe this week (he's 16 weeks). After several nights in a row where he woke up in a coughing fit, he seems to be back to sleeping like a champ. Marty put him to bed last night at 8:30 while I was swimming and he's still sleeping now at 7:00 am. Dude can sleep.

He smiles A LOT, but it's so hard to get a picture of it! He's all smile smile smile and then you hold the camera up and he's so serious. We got a bit of video here of him with some small smiles.


On the workout front - eh. I feel like a joe-shmoe fitness person right now. I typically get one workout in a day, but sometimes not, so I'm maybe getting 5 workouts in a week. 5 workouts a week does not a good triathlete make. I jogged on Thursday for 1.5 miles and then again on Sunday for 30min and didn't have any calf pain so I'm hoping I'm over that and can start running again for realz. I've signed up for another triathlon in less than 3 weeks so that is sort of scary. 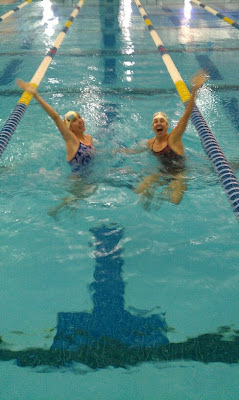 We also offer several group workouts during the week for our athletes so I lead those when I can - mostly it's been the biking workouts when I can since running has been non-existent. I'm also trying to make Friday morning masters - Logan comes with. 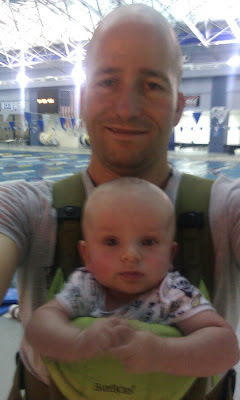 There are certainly ways in which I could be training more. But a lot of times when push comes to shove, I'd rather hang out with Logan and Marty. I know I'm not going to get these experiences back because he'll grow up so fast (he already is!) and triathlon and racing will always be there. For instance, I could've ridden my bike on Sunday afternoon but instead we decided to have some quality time at our favorite bar, The Flying Saucer. 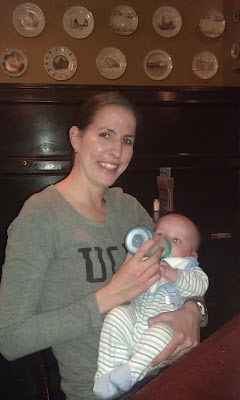 We joked that if Logan gets a plate on the wall like Marty, we're going to make sure that this picture is in the middle - his first drink at the Saucer! Won't he love that? :)

And before you judge, there were a bunch of kids there on Sunday afternoon.
Posted by BriGaal at 6:06 PM

I'm glad to see that Logan's looking and feeling better and you're all enjoying getting out and about.

Glad you are all feeling better. Logan is going to be a little charmer.

Logan the gangsta... I got water up my nose from laughing at that line... glad y'all are doing well!