The Battle at Buckhorn is a fairly competitive local race in the town of Wilson which is about 1 hour away from Raleigh. I had been targeting this race for the past month after getting tired of feeling crappy while racing on my less than focused training.  As mentioned in past blogs, I became 'serious' which means all sorts of different things to everyone, but for me it meant not blowing off training and putting myself with groups that were going to push me harder than I can push myself.  I managed to keep it together throughout the past 4 weeks, even with all of our weekend plans and was hitting around 9-10hrs a week.

I was excited for this race! We were going to know a ton of people out there and the overall prize is a really nice belt buckle. Not that this is something I would actually wear but Marty has 3 of them on display from his wins in 2009, 2010 and 2011. I wanted one, too!

The morning of, I was talking to the best babysitter in the world while eating my breakfast at 5:45am. I saw Marty with my black backpack that I had set by the door walking out to the car. I grabbed my purse and water bottles and we were on the road at 6:00.  We only had one wrong turn which is very typical of us (so whoever decided to follow us towards the end, now you know better).  We got to the outer parking lot just after 7, which left us plenty of time to get over to transition. We had already picked up our packets on Thursday evening at InsideOut Sports, and it was going to be nice to not feel rushed and just warmup!

I got out of the car and looked into the backseat.

"But I saw you carry it out to the car before we left."

"Bri, I never grabbed your backpack."

My face must've looked bad at this point, I know my stomach was at my feet, because Marty's next words were, "Are you kidding me? You left your entire transition bag at home?!"

Okay. Okay. Think. I am wearing my race outfit. My helmet is in the car, my bike is on the rack.  Marty has extra goggles.  I have on my trainers. They probably will let me compete without my run number. Can I do this 17 mile hilly bike in my regular running shoes on top of my pedals? Because that is my best option right now.  HOW COULD I BE SO STUPID?!?!?!


I ride my bike to transition and head to Primo, who's on the computer. We exchange pleasantries then I sheepishly tell him I've left my entire transition bag at home and would they happen to have a spare women's size 9.5 bike shoe with Look pedals that aren't even made anymore? Bobby Dixon overhears and runs this info over to the DJ to announce and now everyone knows what a dumdum I am.

Of course, this is not the spare something that someone might have laying around in their car. This is when Anne MacDonald walks up to me and says, look, you will use my shoes and Dave will switch out the pedals.  I don't need to do this race; my race is in 2 weeks.  This is your 5th race in the series and you need to do it.

It's at this point that I start to lose it a little.  She is being so nice, and this is my fault! She can't sacrifice her race for me! I can't say yes to this!

She is very persuasive. I reluctantly say, ok. Her shoes are about 1 - 1.5 sizes to small, but doable.  I feel horrible.  I ride my bike with her pedals and shoes and it's fine.  I am still conflicted and then Jason runs up with his flat pedals from his mountain bike and Anne will use these.  But shouldn't I use these?  What is going on here - our friends are the best.

At this point its time to get in the water and I feel like I have already done a race.

Everything else is pretty unremarkable after my pre-race antics.  The most exciting thing is they decided to start the entire race, men and women, (~160 competitors) together. I swam okay, better than I have, but nothing to really write about.  My T1 was slow as I felt like Cinderella trying to fit my too big feet into the small glass slipper.  The bike was fine - her pedals have a ton more float than mine so I wasn't comfortable getting out of the saddle (so I didn't).  The bike is a long 17 miles on country rolling roads.  I passed a few guys and a few passed me.  I passed Erin early on in the bike to move into first and held it the rest of the race.  I looked at my feet several times during the bike, and thought, oh look how cute and tiny they look! They were glad to get out of the shoes by the end. My poor crunched toes. 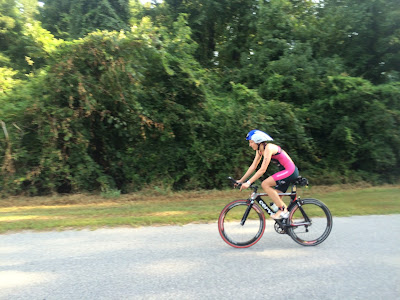 T2 was also very slow. Tying and double knotting your shoes is not quick.  My racing flats with speed laces were waiting patiently for me back home in the bag.  My run felt good, or at least better than it has. It helped that we really lucked out with a gorgeous day. I was able to pass a few guys and saw Marty rocking the speedo a bunch of times on this two loop, out and back course. 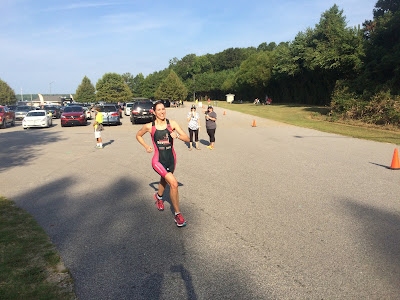 I finished first and won the belt buckle.  I feel like I should give it right to Anne who finished second in her age group by just 20 seconds.  Certainly if she had her bike shoes and cleats this would've made up that difference.

And just to add insult to injury, on my cooldown I was stung by a wasp on my leg.

So yeah. Just because you have been doing triathlons for 20 years doesn't mean you are immune to some very big, rookie mistakes.  I'm so thankful for everyone who helped me out at the race.  We really are surrounded by great people.

#osbrocks ... love you guys, this made me happy.