Fall has fallen here in NC. I have no idea if that is a real saying, but you always hear spring has sprung, so thought it might work. After all the rain earlier in the week we now have cool temps in the morning that give way to beautiful sunny afternoons. I love this time of year – it makes me want to run run run!

We had a full weekend – Marty’s Saturday was particularly busy. I did some shopping with Kari where we managed to get a lot of the same clothes…we apparently have very similar taste, although hers is decidedly better so it was good to have feedback. We also had one of my athletes and her husband and their cute puppy staying with us for the weekend since they were all doing one of the Jordan Lake sprints (not the puppy, duh). Tassie was very happy to have a playmate that was not myself or Marty.

In the afternoon I went to packet pickup so I could give a free clinic on race strategy. It went well and then afterwards we had dinner and then into bed. After all, I had a race the next morning! They ran the Men’s sprint on Saturday and the Women’s on Sunday.

Like I mentioned in my previous post, I didn’t want to end on my National’s race. I’ve had a lot of time to think about that race and really think I put too much internal pressure on myself – that with the travel and any stress related to it possibly caused me to be more fatigued than I should’ve been. I wasn’t outwardly nervous or anything, and Marty even commented that I seemed very relaxed. I guess I just internalized everything or something. I was talking to a friend of ours who used to live in VA the night after the race and we both lamented about how it was our ‘A’ race and it just didn’t go as planned. He said that whenever he goes to these big races he often gets too nervous and then his legs end up being so tired – I said, that’s exactly how I felt! Anyways, it’s water under the bridge at this point.

Sunday morning came and it was pretty chilly – but more importantly, quite windy! This was a very small race, maybe 150 competitors? We got to park right next to transition and everything was just easy. I knew a lot of people so got to catch up and chat with everyone. There were only two of us racing Open, me and local pro Stacey Richardson, and two Master’s Open (Kerry and Cari) – so there were a wopping 4 of us in the first wave! The water was choppy! We started off and Stacey quickly swam away from me. This past week had already turned into off season, so swimming I was not…I seemed to have lost the fast gear but still had a good swim and came out about 40 seconds behind her. I think we both knew going in that we would both be by ourselves the entire race and just have to time trial everything. 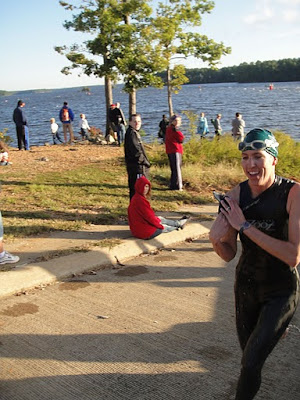 The bike was windy, and it took me awhile to get warmed up. I knew Stacey would put more time into me here as she is a powerful cyclist. My only chance would be to hopefully grab back some time on the run so our distance apart wasn’t TOO embarrassing. I felt great on the run! Like myself again! And the run was extremely challenging – it was similar to the Duke Half course, but we went right after the big hill which was ANOTHER hilly road. It’s all off road back there but I like that. Anyways, it may have been a tad short because my watch read 18:59 upon finishing (19:00 if you go by their timing, which I’m not!). Stacey ended up beating me by just over a minute, so that’s a total win for me! :) And most important – it was very fun and I’m happy to end on this note. Here are results. Also, thanks to Angela and Tim for coming out there to cheer for everyone! 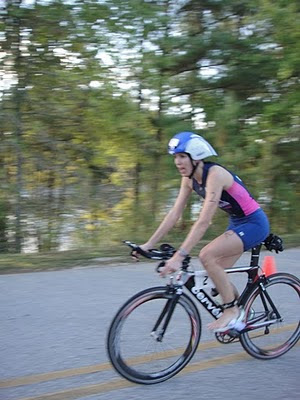 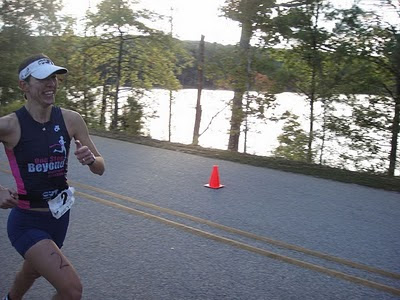 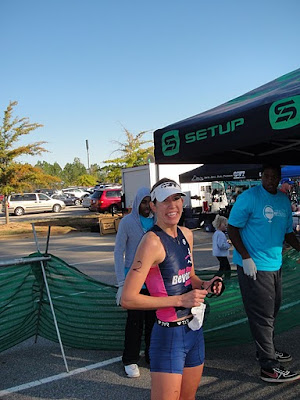 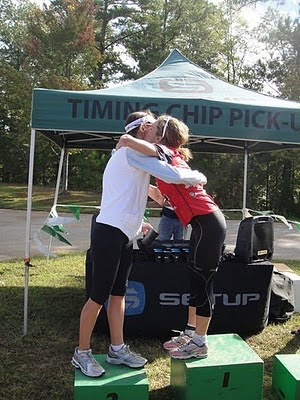 Master’s Showdown…One More Time
My nemesis, Erik, who has been featured on this blog before when talking about the open water swims, was doing his first triathlon the day before at the men’s event. Now, it’s extremely hard to compare times from different days – who knows if they set the buoys out the same distance, weather conditions (the race director said that the women had it choppier), and swimming attire (I wore a wetsuit, he didn’t) but seriously here our swim times. This is getting creepy!

So whatever, I totally won this round!

Sunday afternoon we had an Oktoberfest party with our Master's team at the very cool house of John-the-Late (who has a complex now and has not been late to a practice in a couple of weeks). Such a fun group of people and great way to end the weekend.

Congrats on your race and on such a speedy run!

My second "woot woot yeah" for the day...nice race. I didn't realize you came out so close on the swim. Fun to watch you fast ladies...I can keep up in my dreams...lol.

Glad you could end on something you were happy with.

And you were smiling and your tongue wasn't out! Mom

Way to take out your nemesis on the swim! Congrats on a solid race and a flying run!