The title of this post comes from the extremely eloquent Jay-Z, and it's in regards to my severely messed up bio-mechanics. But before I get to that because I'm sure everyone is on the edge of their seat dying to know what's wrong with me (okay, maybe just my family is wondering...) I'm going to talk about the weekend first.

Pretty much on Friday after having extreme pain in my foot, I knew I wasn't going to be racing on Sunday. I talked to my sister on Saturday who is a Physical Therapist and she explained some isometric exercises for me to do -- and my foot felt better! I called her back and told her this and then said, "but I probably shouldn't race?" big question of hope in my voice - she responded with, "Uh no, do not race. Go see that PT you talked about and see what she says."

We drove down to White Lake Saturday afternoon for a beginners clinic Marty and I were putting on. We had so many people who wanted to attend that we enlisted Alysia to help out. The clinic went really well (or is it good, whatever), then we went to our hotel and hung out with the Finley YMCA tri gang.

I had a great time cheering for everyone at the sprint the next morning. There were 3 former UNC swimmers who swim with our Master's group who were all doing their first triathlon. They did awesome, including a 4th overall finish by Erin! Becky and Kelly were cracking me up before the race as they had no clue what they were doing. Marty had an awesome swim and an excellent bike, and his run wasn't too shabby post-recovery from that very hard St. Anthony's one week ago. Unfortunately, he got dinged with the 'number not in the front' rule as he crossed the finish line. 2 minutes!! I'm not sure if this is a USAT rule or just a setup events rule, but man does it seem useless. I heard some reason about backup timing and that's the reason, but seriously, everyone has numbers marked all over their bodies, too. And 2 minutes? That is a crazy amount of time for a sprint for something that is not a safety issue or gives you an advantage. Rant off - I know a lot of people over the years have been dinged with this penalty so it's not like we aren't aware of it. In fact, at the clinic the night before I was sure to tell everyone about this rule.

Okay, so on to my problems (but a b*tch ain't one, hahaha). It took Lori quite awhile to even begin to understand what was going on with me since I'm apparently quite a case analysis for what should be happening but isn't and why? The major thing is my right hip is anteverted (turns out way more than it should), this had led to a lot of my problems on the right side. My IT band is super tight, my back, my calf and everything in my feet.

My cuboid is still sublexed. 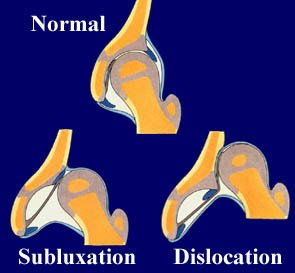 Which is why my foot still hurts. The little muscles in my foot are not strong enough, and/or are counteracting to all my tightness so it won't stay in position. She couldn't even get it back in place last night.

"Tight heel cords, causing an early heel lift, disturb the normal weight transfer through the lateral column and initiate the syndrome. Because the cuboid aids the function of the peroneal tendons by stabilizing the tendons as they pass under the foot, the subluxated cuboid may disturb normal peroneal muscle function. This can lead to tendonitis and referred pain to either the lateral ankle or the plantar aspect of the forefoot."

An interesting thing I read on the internet about anteverted hips is in children you will see this as a toeing-in, or pigeon toed. I was pigeon toed as a child and even had to wear some sort of contraption on my feet in bed so my hips grew properly. At least I think that's what it was, I don't remember since I was so young, but I do remember my sister's telling me that they liked to stand me up when I had it on because I would immediately fall down. Oh being the youngest was so fun ;) Anyways, I'm wondering if my hip problem now stems all the way back to then.

So what to do? I'm supposed to concentrate on my gait while walking on my right side. I have a bunch of foot/ankle exercises to do to help strengthen my foot up and hopefully get that cuboid to stay put. I also have glute/medial exercises to help with my hip problem.

My sister the PT is coming into town on Wednesday so I'm going to have her help me make sure I'm doing all my exercises correctly, and maybe have her try and get the cuboid back in place. Maybe my foot will be stronger by then? Who knows. Lori also said that my body has compensated really well over the years for having this issue, but it's now hit a point where it's letting me know it's not happy putting up with it. I have a feeling it's also due to the fact that I've always been such a low mileage athlete.

So I can't run right now, but hopefully soon. I can swim and bike, though.

Sheesh, that was really long and probably not very interesting to most. Sorry about that.

Oh...I'm so sorry about your foot, but at least now you know what the problem is. And, you have exercises you can do to help! I think it's awesome that your sister is a PT and is coming to help you out - woohoo for awesome sisters!

I wore the same contraption on my feet when I slept as a toddler!!! My parents always called it the 'brown bar' and it basically turned my toes out. My hip is still a mess and I am at a total loss for what to try next. I hope your foot feels better soon.

that was extremely interesting!
-ds

Darn feet and bad biomechanics!! Hope you can get that sucker back into place soon and be pain free. At least you still have swimming and biking - the best thing about triathlon 'eh?! :) Wishing you a very speedy recovery!

Thanks for the info and sorry for the pain. You got yourself around in your crib pretty good with the contraption on! Since you have been running since you were 8 (?), the foot has lasted a good long time. Hopefully Shana will be able to help out. Love ya Mom

Sorry to hear about your foot. Hope it gets better. And that lovely two minute penalty is NOT a USAT rule but a rule put in place by setup events due to their partnership with Birds eye view photography and BEV's desire to have the finish line photos easily identifiable. Got to love economics